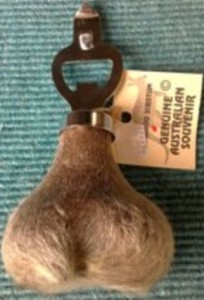 Kangaroo Scrotums Are the New Victims of Global Warming

Climate change is a huge concern for many, many reasons: the ice caps are melting, droughts are sweeping the world and mega-hurricanes are striking cities that have never before had to weather such storms. But it’s only recently that climate change has threatened Australia’s hilarious but substantial kangaroo nutsack trade. The hopping marsupials’ scrotums, which are crafted into souvenir bottle-openers and key rings, have made manufacturer John Kreuger, known as the King of Ballsacks, hundreds of thousands of dollars. These days, however, John’s trade is suffering due to a series of floods in Queensland – which some meteorologists believe to have been caused by climate change. The flooding has purportedly pushed kangaroos inland and away from the areas where they’re normally killed for their testicles.